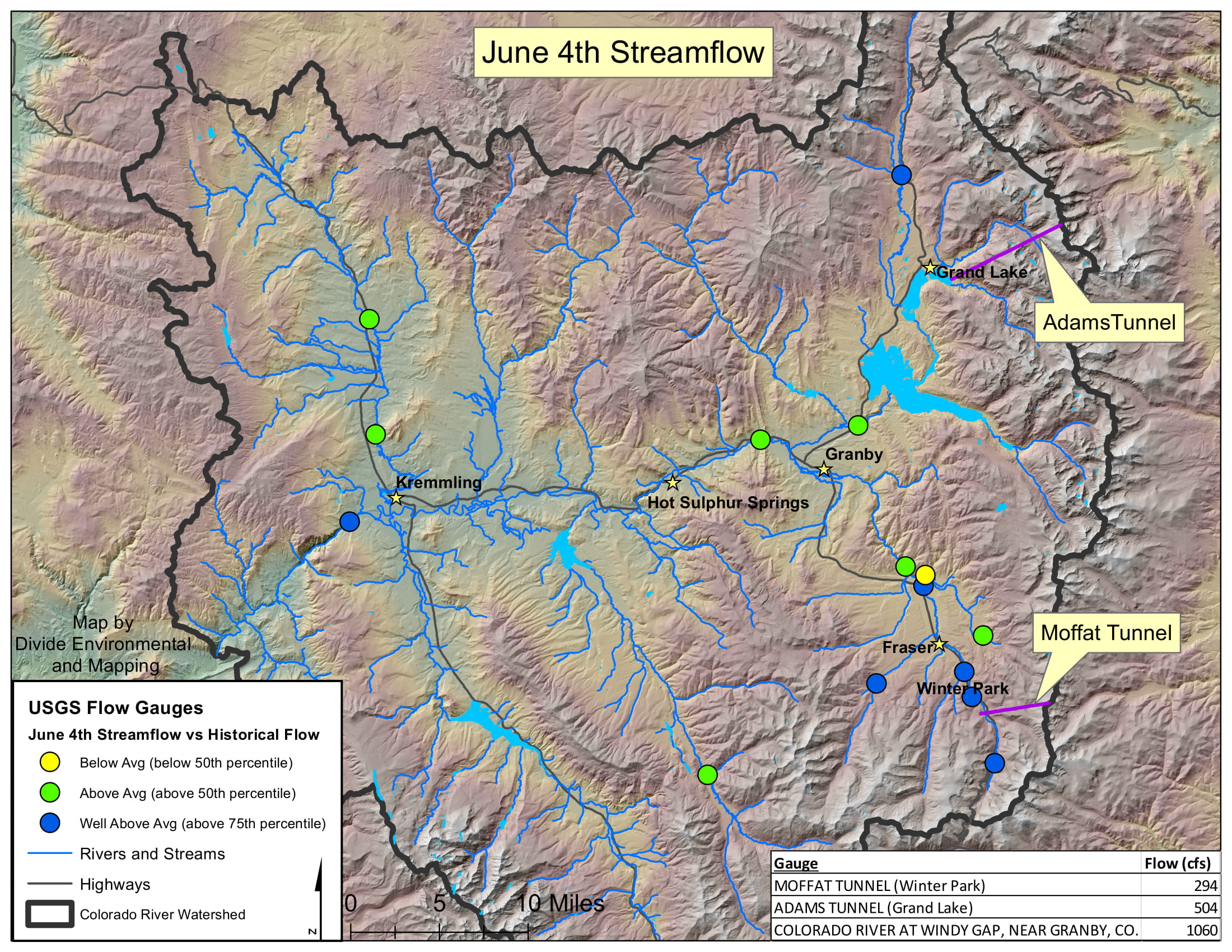 Slightly below average flow was recorded at Ranch Creek, marked by the one yellow dot on the eastern edge of the map, just north of Fraser. Almost all of the streams feeding into Ranch Creek as well as Ranch Creek itself have some portion of flow diverted east through the Moffat Tunnel, with water flowing through a series of canals high along the divide.

Almost every waterway in the Fraser Valley has a diversion on it in one form or another. Water is diverted east to meet the needs of the growing population in Front Range metro areas through Adams Tunnel in the north and the Moffat Tunnel in the south. The amount of water flowing through both of these diversions on June 4th is shown in cubic feet per second (cfs) in the chart at the bottom of the map, with a combined total of just under 800 cfs.

Windy Gap reservoir is represented by the green dot between Granby and Hot Sulphur Springs and is where the water flowing from the Fraser River and Grand Lake area come together in the Colorado River, representing all of the water flowing through the Upper Colorado River watershed minus the water that is diverted east. Flows at Windy Gap represent the amount of water being sent further down river and not diverted east across the Continental Divide. On June 4th, the combined flow of the Colorado River at Windy Gap reservoir was 1,060 cfs – approximately 200 cfs higher than what was being diverted east through Adams and Moffat tunnels.

This year’s high flows early on can also be seen in USGS graphs comparing current flow levels with historical medians. 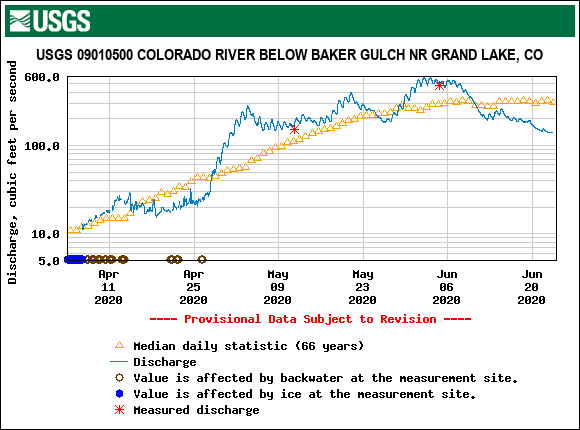 The Colorado River Baker gauge is located just outside of Rocky Mountain National Park in the Kawuneeche valley. The gauge is downstream from the Grand Ditch, which has been in operation for decades. Flow levels captured by this gauge have been modified by Front Range water diversions. 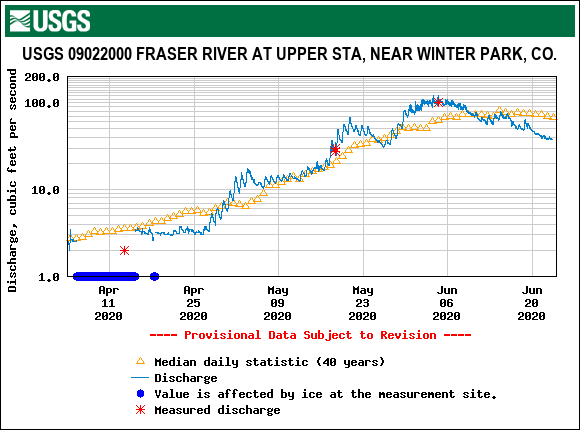 The USGS gauge on the Upper Fraser is the only measurement taken in the Fraser Valley that is above the Moffat diversions. This gives us a good feel for what the watershed is like before diversions to the Front Range.

The blue line indicates this year’s measurements, while the orange triangles track median flows on that date, marking the middle of measurements from the historical record. This means that, historically, half of flow levels measured above the triangle, and half below.

This year’s flow line starts at around the same place as the historical median, but then gets steeper and much higher at a faster rate than historically, before dropping down earlier in the season.

This is in keeping with climate change model predictions for the region, which anticipate earlier spring runoff with higher peaks earlier in the season, and rain when there used to be snow.

Flows running at higher than historical average so early indicates warmer temperatures earlier on in the season. The historic flow record is being squished toward the earlier part of the year and squeezed up higher – showing that things are warming up faster and sooner in the spring.

This has serious implications for long-term health of the watershed.

Late summer and early Fall are typically the driest months in our alpine ecosystem. Early peak runoff in the spring means hotter and drier conditions for longer from July through October, with most of the snow from the mountains gone.

Earlier peak runoff means increased fire risk for longer and additional stress on the surrounding ecosystem, as water that plants and animals rely on is no longer there.

While water temperature isn’t a concern when rivers and streams are running fast and high with spring snow melt, the summer months see ever-decreasing flow levels throughout the watershed.

July, August, and September are critical months when it comes to high temperatures and we will be tracking this with our upcoming Watershed Snapshots. High temperatures mean stress for our alpine aquatic ecosystem, so be sure to read our tips on fly fishing in warmer waters and follow us on social media to stay up-to-date on your local watershed.